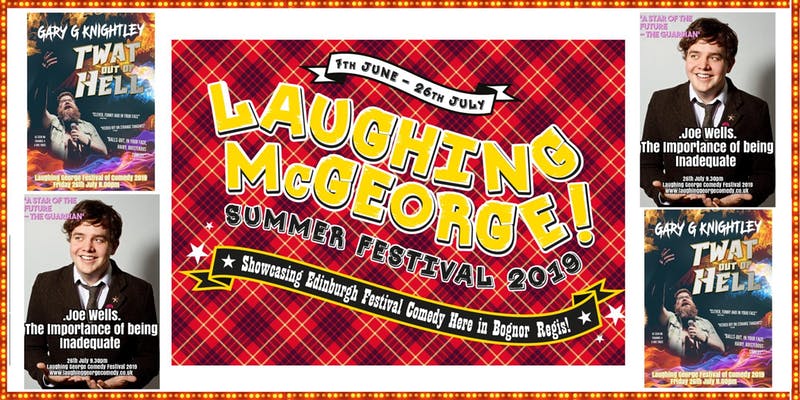 Each Friday we will showcase 2 shows, each are around an hour long and there will be a half hour break in between to enjoy a drink downstairs or in the garden, tickets for each night cost only £10 each! That is just £5 per Edinburgh show! Come along and support the comedians that are travelling from afar to entertain you down South!

FRIDAY 26TH JULY 2019 8.00PM – GARY G KNIGHTLEY – TWAT OUT OF HELL 9.30PM – JOE WELLS – THE IMPORTANCE OF BEING INADEQUATE TWAT OUT OF HELL – GARY G KNIGHTLEY Twat Out Of Hell features comedian Gary G Knightley (as seen on Channel 4, BBC Three and the West End). MCA finalist 2017, Gary G Knightley brings you a comedy show about, well, him. In an ever evolving world it is getting harder and harder to say things without offending anybody. Join Knightley as he explores the topics we aren’t allowed an opinion on and the people who are off-limits. “Quick witted with strong audience work, sharp observations and great stage presence” (Bunbury Publishing) “Twat Out Of Hell is a filthy hidden gem and why the chuff it’s free I just don’t know.” (The National Student) ‘Veered off on strange tangents’ (PragueYouthTheatre.wordpress.com). THE IMPORTANCE OF BEING INADEQUATE – JOE WELLS Joe Wells’ writing career began when his first book ‘Touch and Go Joe’ about his experiences of OCD was published, since then he has made a name for himself as a stand up comic, writer and speaker. Joe now focuses mainly on his unique brand of political comedy. Awards Comedy Central Funniest Student 2010 – Winner New Act Of The Year (formerly Hackney Empire) 2011 – Finalist Leicester Mercury Comedian of the Year 2012 – Runner Up The Guide Award for Best Comedy 2011 – Shortlisted London New Comedy Awards 2010 – Finalist The Guide Award for Best Comedy 2009 – Shortlisted “Joe Wells is a skilled jokesmith who threads great gags through intelligent political material that, whilst razor-sharp, is never particularly angry or dark.

As the first gross gags open up into smarter, topical ones it’s clear that this is a tightly-structured, well thought-out set. Excellent jokes and sly political comment wrapped tightly in a neat parcel which delivers regular, powerful laughs from a delighted audience. He spins new life out of easy targets like bankers and the BNP with some wonderful imagery” British Comedy Guide “A star of the future… some of the most surprising and thought-provoking material coming from any comedian in his early 20s” The Guardian “Highly original, inspired and suitably different from the rest of the crowd… brilliantly crafted jokes” Comedy Central “Proud communist Joe Wells thankfully appeals to the intellect as he discusses the BNP’s misunderstanding of flags, fascist propaganda and what would happen if Richard Littlejohn and a harsh comedy reviewer fought to the death.

There are solid gags throughout with some unexpected and beautiful turns of phrase. Wells has clearly worked hard building his set, which is well paced, interesting, balanced and funny” Chortle “A real venom in his delivery seemed to communicate that the numerous laughs that he manages to obtain are just positive collateral to the message he is trying to portray” Broadway Baby “A tight confident set with some exceedingly clever moments” Fest Magazine “A much-needed voice against hypocrisy as well as a wonderfully talented stand-up comedian, Joe Wells uses his comedy to burst a gigantic hole in the sides of homophobia, misogyny and racism while still managing to remain funny throughout” Portsmouth News

Promote your business with us. Enquire to see how we can help.